I would like to draw your attention to the 5th International Symposium on Phenomenological Research in Education at Humboldt-University, Berlin:

The symposium takes place from 1st – 3rd April 2019 at the Humboldt-University of Berlin.

I am pleased to present the program for our 5th International Symposium on Phenomenological Research in Education in Berlin. From now on it is also possible to register for the symposium. The registration form can be found on our website. Please note that all speeches and discussions will be held in English.

I am looking forward to interesting speeches and discussions. 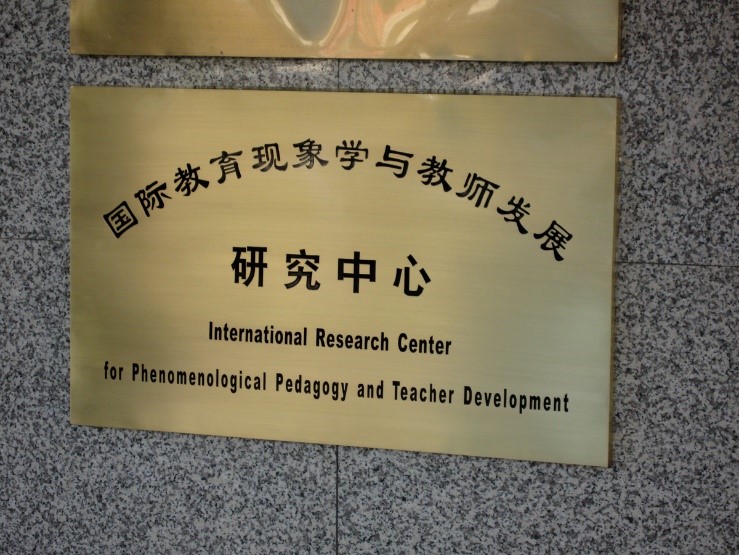 The center was founded in 2001 by Professor Hong Ning in close cooperation with Max van Manen. Besides Hong Ning, Professor Cai Chun and Professor Zhu Xiaohong are currently the directors of the center. In Beijing, there is a very interested group of lecturers and students. A number of phenomenologically oriented Masters and PhD theses have already been written. They deal with foundational-theoretical and methodological questions of education. In addition, the curriculum of teacher training in all subjects is phenomenologically oriented. It also includes impressive textbooks of phenomenological descriptions of teaching experiences with a focus on the pupils. Several Chinese colleagues will attend to our 5th International Symposium on Phenomenological Research in Berlin. I am looking forward to a productive exchange!

This article provides a historical and thematic overview of the most important contributions to phenomenology in German and English-language educational studies. In this context, phenomenology is important both as a theoretical tradition and a research method, in both cases directing attention to the experiential, relational and intersubjective dimensions of pedagogy, teaching and learning. In Germany, phenomenology as a method and as a philosophy has aimed at redefining traditional theories of education and Bildung (personal formation) in terms both empirical and theoretical. In the English-speaking world, phenomenology has been used primarily as a methodological approach to illuminate lived experience particularly in the caring professions including education; it has also occasionally provided possibilities for articulating theories of teaching and learning in close relation with concrete practice.

Learning from the Things

Phenomenological approaches and approaches of Gestalt psychology have long focussed materiality within teaching and learning with and from children. Ch. Bühler states in heris phenomenological-psychoanalytic study on the development of children: “The prompting character generates the object altogether, since the child sets direction since it sets direction” (Bühler 1967). The football, rolling across the street, the stairs challegingprompting us to be climbed, the crumb tempting us to be picked up, the building block inviting us to play. The prompting and challeging character of things and the intentions of the person acting are related to each other in “complicity” (Meyer-Drawe). Claus Stieve shows in his older, highly readable study that things not only bear a prompting character but a “demanding” character as well:

“Like putting on a slipper or the now unfamiliar winding up of clockwork, many things demand a necessary, appropriate conduct, be it a corkscrew, the mobile phone, the car, the washing machine, the shirt with its buttons or the bottle for the infant” (ibid. p. 176).

The demanding character of things shows that their significance to us only reveals itself in the context of the concrete situation. As part of the Gestalt-like context they point to something beyond themselves as well.

See the following site for an interview with the author and a reference to his study (in German):

I would like to draw your attention to the 5th International Symposium on Phenomenological Research in Education at Humboldt-University, Berlin:

The symposium takes place from 1st – 3rd April 2019 at the Humboldt-University of Berlin.

Please find further information in the Call for Papers.

Phenomenological Philosophy of Education from Its Beginnings to Today. An Anthology

Phenomenological researchers have held a well-attended conference titled “Embodiment(s): Phenomenological ‘DoubleMovement’ between Educational Theory and Bodily Practice in Pedagogical Fields” at the congress “MOVEMENTS” of the German Educational Research Association (GERA). How can moved embodiments become the subject of research? Point of origin was the phenomenological perspective of embodiment as kinaesthetic movement, which, as relation of the lived body, is directed towards itself, others, material and imaginary objects as well as the intellectual sphere. Children, adolescents and pedagogues are in a bodily movement with and towards each other in pedagogical situations. They embody themselves in a shared movement, in which they respond to actions, objectives and claims of others.
The contributions discussed the concept of embodiment as an interrelation of body and lived body in the context of cognition, language, sense and sociality. They took up the recent international discourse on embodiment with regard to neurosciences, poststructuralist discourse theory, hermeneutics, image theories as well as theories of pointing and gesture in the realm of cultural studies.
In their presentation, “Embodiments: Embodied Dimensions of Communication between Pedagogical Professionals and Children in Day Care Facilities” Ursula Stenger and Uta Thörner demonstrated how pedagogical situations between professionals and children develop in response to pre-existent cultural structures and norms. Subsequently, the embodied-bodily communicative situation between professionals and children was interpreted as the development of a mutually shared world with regard to Merleau-Ponty and Nancy’s thoughts on sociality and corporeality. These embodied-social constitution processes were presented in the form of videos and video analyses.
Malte Brinkmann presented a theory of embodied understanding (“Embodied Understanding in Pedagogical Contexts: Theory and Empiricism of an Inter-Corporeal Hermeneutics of Expression”). He pointed out that understanding as a pedagogical process contains an inherent logic regarding experiences within learning and educating – with a shift towards a perspective on lived-bodily and bodily-moved embodiment. Using examples from video analysis, he showed that understanding is an inter-corporeal practice of responsive embodiment, in which material and normalising aspects occur on the one hand and performative and singular aspects on the other.
Denis Francesconi (Aarhus University) introduced the concept of Embodied Cognition Theory (EC) as a research programme between cognition theory and phenomenology. He subsequently adopted this perspective for the practice of mindfulness meditation as an embodied practice in teacher education.
In his presentation, „Gesture, Atmosphere and Movement: Bodily Dimensions of Sociality in the Classroom” Severin Sales Rödel explored gestures and movements in the classroom as embodiments, in which teachers and pupils show themselves in a specific way. Using the practice of video analysis, phenomenological perspectives on atmosphere and situation have been suggested for a bodily- and embodied-theoretical classroom research.
The high participation and manifold discussions showed that phenomenological perspectives are regaining attention within philosophy of education. A volume on “Embodiments” is in progress and will be published as part of the book series “Phenomenological Philosophy of Education”.
Malte Brinkmann