Eugen Fink – The questionability of the modern educator 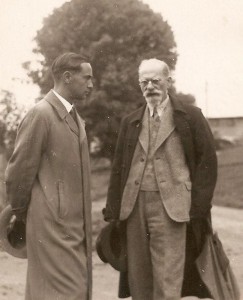 (Eugen Fink and Edmund Husserl, image by courtesy of the Philosophical Seminar of the Johannes Gutenberg-University Mainz)

In the fundamental event of “education”, the human existence gains advice and support, form and constitution. The human being is a priori without orientation and insecure, formless and undefined. Only the imperfect living being is able and forced to bring itself in form and constitution. Education is necessary to overcome our existential plight. Only someone who finds himself in this existential plight can educate and can be educated. […] The human being lives in a mode of understanding care of the self: he puts himself into a practical relation to his own existence [Dasein] and to the Being [Sein] of all beings [Seiendes]. Yet, such self-relation is not a consequence of the “consciousness”, it is not a conscious reflexivity, but rather a more primordial and tense structure of existence. The human being is “his own task”, he must become what he is, must look for and fulfil the essence of his being. This is not a mechanical necessity, it is an existential need. The imperfection of our life does not only exist objectively, it is above all a felt, experienced and sustained incompletion. […]

This calls western anthropology into question, which is defined by metaphysics and describes the human being as a creature between animal and god. We are the imperfect beings [Seiendes] in a universe that is otherwise filled with perfect things and creatures; we are a cosmic exception and an ontological paradox. The self-care of the human being does not mean, like one might assume, a self-relationality of the single individual only to himself. The distinction of “I” and “You” itself already presumes the self-relation of existence [Dasein]. It is a fault of the common pedagogical theories to start naively from the relation between educator and student. Where does this reference come from? Where does the interest of the educator in his pupil come from? Are Me and You, We and the others given facts of the social world? Is it enough to point these facts out, or is a fundamental contemplation [Besinnung] necessary that experiences and discusses the pedagogical meaning of the social references as a problem in the first place?

The Philosophical Seminar of the Johannes Gutenberg-University Mainz wrote an interesting piece on Eugen Finks biography, you can find it here (only in German language).

On the main page of the Ophen Blog you can also find an extensive bibliography of Eugen Finks works: Eugen Fink on Ophen.org.